VEP has helped a varied range of business clients manage strategic risk and opportunity, from entrepreneurial start-ups to global giants and across a broad range of sectors (see under Sector Experience).

Below is a selection of corporate clients for whom Vaughan Evans has worked with recently, whether directly through Vaughan Evans & Partners or working with other consulting groups.

Business clients are grouped under the assignment types of acquisitions, alliances, divestments and strategy.

- For a leading British producer of domestic heating equipment, he led the team that assessed the business risks and opportunities of acquiring another leading producer of boilers and radiators, including a review of the feasibility of achieving management’s planned operational synergies and potentially negative revenue synergies. The transaction was completed successfully

- For a U.K. flexible plastic packaging producer, he led the team that assessed the business risks, opportunities and potential revenue enhancement and cost saving synergies of acquiring a U.K. competitor. The transaction was completed successfully

- For an Italian specialist shipping company, he led the team that assessed the risks and opportunities of acquiring a Mediterranean based shipping group specialising in telecommunications cable laying, maintenance and surveying.  Advice to withdraw given impending over-capacity was accepted

- For a U.K. mobile telephony operator considering the acquisition of two cellular service providers in France and Germany, led the team which valued the companies on a stand-alone basis, quantified the achievable synergies and assessed the potential strategic value from gaining a beachhead in markets with large opportunities in both fixed and mobile telephony. The transaction was completed successfully

- For a U.K./U.S. industrial conglomerate, led the team that assessed the stand-alone and strategic values of a U.S. acquisition in uninterruptible power supplies.  The client withdrew from the auction

- For a U.K./U.S. industrial conglomerate, led the team that assessed the stand-alone and strategic values of a U.S. acquisition in uninterruptible power supplies.  The client withdrew from the auction

- For a U.S.-based international systems company considering a strategic investment in a Spanish defence electronics and IT consulting group, he led the team which valued the target on a stand-alone basis and assessed the source, scale, value and risks of potential synergy opportunities.  As a result of the findings, the client declined to make a bid within the range anticipated by the target’s shareholders

- For a major U.K. building society, he helped develop both its organic and inorganic strategies, screening prospective merger candidates for strategic fit and ranking them both qualitatively, by managerial, organisational and cultural fit, and quantitatively, by assessed value of potential synergies.  This project paved the way to a path breaking merger in the industry

- For a British petrochemicals company, he led the team that assessed the strategic value of a Chinese bulk intermediate chemical business in Shanghai to be contributed to a planned joint venture

- For one owner of a 50/50 joint venture in value added network services in Italy, he led a team which assessed the value of the joint venture on a stand-alone basis and of the synergies achievable, hence premium payable, by global telecommunications alliances in managed network services.  He also advised of the impact of critical changes in the competitive environment on the value of the stake.  As a result, the client negotiated a put option with its partner at a most favourable price

- For a Spanish manufacturer of telecommunications equipment with some short-term cash flow concerns, he helped develop a restructuring strategy and led the team which forecast the cash flows and valued the group as it was and as it could be once the portfolio of companies was streamlined, foreign partners brought in and retained core businesses managed with a more focused strategy.  The strategy was pursued successfully and a German partner brought on board

- For the European, U.S. and Asian airline owners of three international information systems alliances planning a global merger, he helped draw up an ownership structure, a funds flow mechanism, transfer pricing guidelines and an organisation structure, and led the valuation team, which assessed the relative value contributions of the three parties to the merged entity, as adjusted for Newco’s proposed transfer pricing policy and after apportioning values to each party from expected synergies.  Merger talks were abandoned when one party struck a beneficial deal with a fourth party

- For a European chemicals group, he advised on the options for divesting its resins division, in particular on the timing and procedures for a management buy-out bid

- For a European automated equipment producer undergoing corporate restructuring, he led the team which advised on alternative partnering or divestment solutions for those businesses unlikely to remain core to the group.  This included advice on scope of assets for partnering, the relative merits and likelihood of attracting prospective partners/bidders, likely achievable values to financial or trade buyers, recommended partnering options and likely timetables, as well as the preparation of draft Confidential Information Memoranda

- For an international rail operator, he led the team that assessed the value of its computerised reservation system as an independent entity and the premia likely to be offered by prospective information service corporate buyers

- For an offshore professional services firm which had diversified into finance administration outsourcing, led the team that advised on strategic options for the share plan administration business.  Recommendations of greater independence and accountability for the organisation, but postponement of joint venture discussions, were put into effect

- For a European stock exchange formed through the merger of a number of national exchanges, co-led the team that assessed options for an organisational structure that streamlined synergy realisation while respecting the needs of the various national partners.  Recommendations for a business-focused structure overlaid by a slim centralised customer account management function were implemented

- For the Department of the Environment, Transport and the Regions, led the corporate finance team that assessed the financial and economic viability of commencing operations at the Mixed Oxide plant at the Sellafield site of British Nuclear Fuels Ltd.

- For a Swiss producer of telecommunications and related equipment, advised on corporate strategy restructuring options and led the financial team, balancing cash outflows and returns from acquisitions and capex in core businesses with inflows from divestments/joint ventures in non-core businesses.  Recommendations were ultimately put into effect

- For a European international ceramics producer, led the financial team on a major corporate strategy assignment.  Through use of economic value added (EVA) and other performance indicators, reassessed the viability of past acquisitions, developed an enhanced project planning process and assessed the feasibility of alternative strategic recommendations

Business strategy in a one-hour read for the busy entrepreneur!

The UK's top-selling guide to writing a business plan! 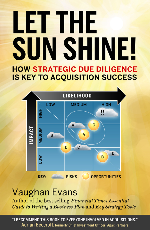